This series contains 12 animated historical maps. For a preview, please consult the map below:

▶ Geographical map for the Saga of Abraham 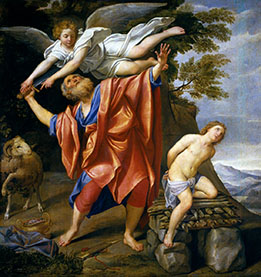 Abraham and the Sacrifice of Isaac by Domenichino

The Bible and History

This map series draws on information from the Bible and makes comparisons with archaeological and historical knowledge for the period between the age of the Patriarch Abraham and the end of the Hellenistic Era. It places the Bible stories in their geographical context of the Near East in Ancient times, with reference to archaeological and documentary evidence.
This series is based on the Hebrew Bible and the Old Testament, but not to the New Testament.

Geographical map for the Saga of Abraham

The Routes of the Exodus

The Biblical narration of the Conquest of Canaan

The emergence of Israel in Canaan, according to archaeology

The frontiers of the Kingdoms of David and Solomon

Disappearance of the Kingdom of Judah and Exile to Babylon

Judea in the Persian Empire

Israel and the Hellenistic kingdoms

Judea at the time of the Maccabees (or Hasmoneans)

The Jewish diaspora during the Persian and Hellenistic eras