This series contains 5 animated historical maps. For a preview, please consult the map below: 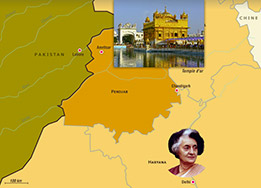 History of India since Independence in 1947

Following the Second World War, Independence for India seemed inevitable, but negotiations were complicated by disagreements amongst Indian political leaders. Upon independence, the government reorganized territories and implemented the States Reorganization Act in 1956. However, many territories still hoped for autonomy - Kashmir and Punjab saw the rise of separatist movements. This series covers the complex history of independence in India as well as the ethnic questions India has faced since.

Independence for India and Pakistan

Following the Second World War, independence for India seemed inevitable, but negotiations were made more difficult by disagreements amongst Indian political leaders.

On the eve of Independence, British India consisted of 17 provinces and more than 500 princely states. In order to adjust and equalize these large administrative units and promote uniform economic development, the new nation, with its federal system of government, undertook to reorganize long-standing territorial divisions.

Meanwhile, demands for states corresponding to linguistic groups increased and in 1956 The States Reorganization Act was adopted by parliament.

Territorial reorganization begun in the 1950s did not put an end to the hopes of many states for greater autonomy. Kashmir and Punjab saw the rise of separatist movements, while in the frontier regions of the North-East, ethno-nationalist movements gained ground.

Kashmir, sandwiched between Pakistan, India, China and Afghanistan, and close to Tajikistan, is one of the most disputed and militarized zones of the subcontinent. Since 1947, it has become a serious bone of contention between India and Pakistan and the theatre of several wars. For India, it symbolizes multiculturalism, diversity and pluralism. For Pakistan, on the other hand, Kashmir’s Muslim majority makes the state a natural part of its own frontiers.

To the north of India, the region of the Punjab – “the land of the five rivers”– was traditionally inhabited by Muslims and by Sikhs, a religious group dating back to the 15th century.

In 1947, the province was divided between Pakistan and India, provoking a violent exodus of Sikhs, who were forced to quit their lands in Pakistan. They lost their rich agricultural properties, as well as their sacred sites. The separatist movement was born out of this context.