This series contains 7 animated historical maps. For a preview, please consult the map below: 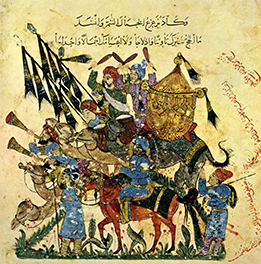 Origins of Islam and the Arabo-Muslim Empire

At the beginning of the 7th century, the Byzantine and Persian Sassanid Empires were weakened by their relentless wars.

On the Arabian peninsula, a new monotheist religion was born: Islam.
It was inspired by the revelation made to the Prophet Muhammad, who was originally from Mecca.

Over the period of a hundred years, Arab warriors conquered an immense empire which stretched from Spain to Central Asia and produced a brilliant civilization.

The early years of the Muslim community

Fragmentation of the Islamic Empire