This series contains 20 animated historical maps. For a preview, please consult the map below: 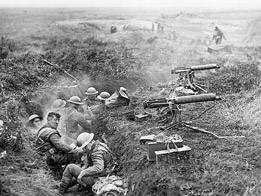 The war that broke out in the summer of 1914 was expected to end quickly, according to the military authorities. Instead, it would last more than four years.
The introduction of new weapons and, in particular, the massive use of artillery at an unprecedented level led to heavy losses for all the main protagonists.
By the time peace was finally established, Europe had lost its role as world leader and it was United States President Woodrow Wilson who put forward the principles for a new international order.

After the assassination of Archduke Franz Ferdinand in Sarajevo, the system of military alliances precipitated Europe into war.

The German and French Plans

This map describes how different military authorities prepared for war: for example the Schlieffen Plan for Germany, and France’s Plan XVII.

With the unification of Germany and Italy, there were six European powers intent on playing an international role. They created two opposing alliances: the Triple Alliance and the Triple Entente.

Independence of the Balkan Peoples

From 1875, there was a series of crises in the Balkans which provoked tensions between the European Powers, particularly between Austria-Hungary and Russia.

As planned by its military leaders, Germany launched an offensive against the West by invading Belgium. Almost immediately, the Russian armies crossed the border into East Prussia.

The Battle of the Marne

At the beginning of September, a counter-attack blocked the German armies’ advance after they had crossed the Marne and seemed to be close to victory.

1915 The multiplication of fronts

The entry into war of new protagonists led to a multiplication of battle fronts: on the borders of the Ottoman Empire, in the Balkans, on the frontier between Italy and Austria-Hungary.

Early in 1915, the French and English governments decided to launch an attack on the Dardanelles with the intention of attacking Istanbul.

The Serbian army, which had resisted the Austro-Hungarians in the early days of the conflict, was forced to retreat due to an offensive launched by the Central Powers and Bulgaria in the autumn of 1915.

France, the United Kingdom, Italy and Russia coordinated their offensives, while Germany fought a battle of attrition against the French army at Verdun. However, by the end of the year, none of belligerents seemed capable of bringing the conflict to an end.

The Battle of Verdun

Germany’s offensive against this exposed position on the front included an unprecedented series of artillery attacks.

The Battle of the Somme

During the first days of the Allies’ planned offensive, the British forces took the main brunt of the attack and suffered huge losses.

As the conflict dragged on, it undermined morale in the countries at war. The decision by the United States to join the war had a profound impact on the strategic position, as did the Russian Revolution.

Germany attempted, and failed, to bring England’s economy to its knees by sinking its merchant ships, a move which led to the United States entering the war.

The Battle of Caporetto

By autumn 1917, the Italian army was forced to give up large stretches of territory, following an attack by German and Austro-Hungarian forces.

Goals of War and Failure of a Negotiated Peace

Attempts to end the hostilities were thwarted by the belligerents’ appetite for new territories.

The withdrawal of the Russian army, confirmed by the Treaty of Brest-Litovsk, gave the German army a temporary superiority in troop numbers on the Western Front, but the arrival of American forces during the summer allowed the Allies to obtain victory.

The Last Hundred Days on the Western Front

In August, the French, British and American forces were beginning to make headway on the Western Front. On 11 November, the armistice was signed at Rethondes before the combat reached German soil.

The Army of the Orient, which had been based at Salonika since 1915, now reconquered the Central Balkans as far as the Danube and the Austrian-Hungarian border.

Europe at the End of the First World War

Based on the principle of recognizing nationalities and the victors’ position of power, the borders within the European continent were redefined and ratified by the several treaties signed in 1919-1920 (Treaty of Versailles, Saint-Germain, Neuilly, Trianon, etc.).