This series contains 24 animated historical maps. For a preview, please consult the map below: 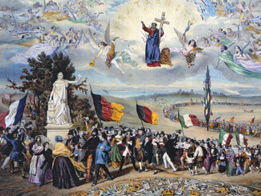 Throughout the 19th century, there was growing interest in establishing new national identities, which had a drastic impact on the map of Europe. These transformations also highlighted the failure of a certain ’European order’ which led to the outbreak of the First World War.

History of Europe during the 19th century: Congress of Vienna – the revolutions of 1848 – nationalism – national minorities – Balkan wars – colonial empires

During the Congress of Vienna, the four great victors (Austria, France, Russia and the United Kingdom) redrew the map of Europe and attempted to put an end to the period heralded by the French Revolution.

Uprisings after the Congress of Vienna

The political map of Europe drawn up during the Congress of Vienna is quickly contested, despite the efforts of the European powers, working together as the Holy Alliance, to avoid any challenge to the established order.

In 1821, the Greeks launched a war of independence against the Ottoman Empire.

The Kingdom of The Netherlands, as constituted by the Congress of Vienna, broke apart in 1830.

This map describes the major phases of the dismantlement of Poland, which had been a powerful country during the 15th and 16th centuries.

This map explores key dates in the history of the Serbian Kingdom from the 12th century onwards.

After the failures that occurred during the preceding period, European peoples wished to obtain greater political freedom and to enforce recognition of the principle of nationalities. Therefore, protests break out at the beginning of 1848.

In 1848, the Spring of Nations ended with the failure of liberal forces in Europe. Meanwhile unification of Germany and Italy marked the triumph of nationality.

The Affair of the Duchies

Danish and German populations lived side by side in the three duchies of Schleswig, Holstein and Lauenburg.

Annexation of Alsace and Lorraine

The annexation of these two regions illustrates how France and Germany interpreted the concept of the ‘nation’.

With help from France, Cavour built up Italian unity using the Kingdom of Piedmont & Sardinia as its starting point.

For Italian patriots, Rome was the obvious capital of unified Italy, but the Pope refused to give up territory belonging to the heritage of Saint Peter.

Excluded from the movement of German unification, the Austrian Empire was transformed into a bi-national state: Austria-Hungary.

France and England become allies in order to combat Russian control of the Straits.

The ‘European Order’, promoted by the Congress of Vienna, was replaced by a system of alliances which divided Europe into two hostile blocs.

Independence of the Balkan Peoples

From 1875, the situation in the Balkans was complicated by a series of crises. In 1914, the Ottoman Empire’s European territory was reduced to Eastern Thrace.

The Norwegians put an end to their Swedish tutelage in 1905.

The outbreak of the First World War blocked the Irish Catholic's motion for independence.

Expansion of the Russian Empire after 1815

The Russian Empire’s plans for expansion in the Far East were blocked by Japan and by the European powers in the Straits.

In 1914, the colonial empires established by the European Powers spread relentlessly across the globe.

Around 1914, a number of populations were linked by a common language, religion or history and sought to obtain their independence or create their nation.

The Ottoman Empire: Expansion and Retreat

This map illustrates several key dates in the history of the Ottoman Empire since the 14th century.

Outbreak of the First World War

In 1914, the alliances between countries bring Europe to the brink of war.